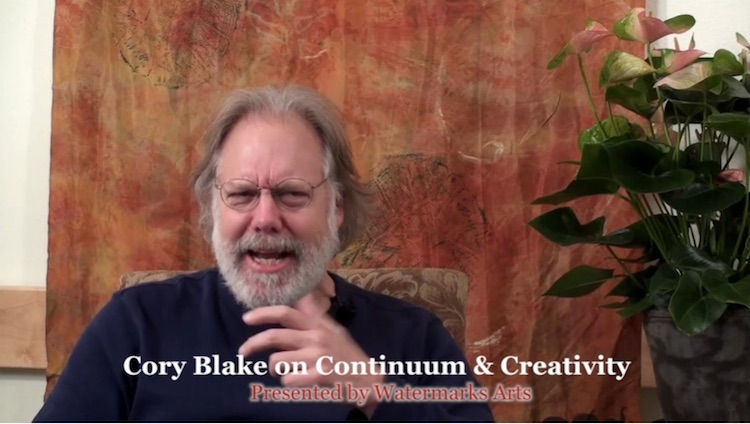 “When my whole body came into my field of awareness … the world became more open to me as well.”

Musician and Continuum teacher Cory Blake on how Continuum changed his experience of playing classical guitar, of creating music and of the interface with meditation.

Cory Blake on Continuum & Creativity from Watermark Arts on Vimeo.  View on Facebook

Well, it’s interesting, Continuum really found me, I didn’t really seek it out. But one of the things it did for me was something I had tried to do earlier, which was to find the most effortless way to play. Because as a classical guitarist, it’s pretty demanding physically on the hands. The hands have to make all kinds of amazing moves – this finger has to go there, this finger has to go there – and I spent 20 years making my fingers do what they needed to do. But I think that when I started doing Continuum I allowed them to go where they wanted to go. My hands became so much more mutable, and they became so much more fun.

I think one of the things that Continuum has down for me is that it has allowed me to really enjoy my hands, as opposed to make them so they were just servants. They were my partners in a sense. I really have enjoyed them tremendously. Continuum allowed me to find that. So that I wasn’t playing anymore, that I was being played. The plasma of me was inspired by the fluid intelligence. So that was really a wonderful thing.

What I noticed with Continuum is that I became somatically aware when my whole body came into my field of awareness. And as that became enjoyable to me it also meant that the world became more open to me as well, and sound became more open to me. But what I really like about sound is that it elucidates community. And if you have a room full of people making sound,  there’s something that happens where people recognize that separation is an illusion. Which is another reason that playing with people in any musical context is so wonderful. That may be the main reason people like to play with each other and they don’t really know it, because they recognize that they’re in a state of confluence.

There was a physical connection to the spiral muscle in my chest that came from Continuum that fattened everything that I did, is the way I would put it. So the metaphysical aspects of Continuum with music… or that I recognized that everything I did was music (and I’m not able to do this all the time): walking over here, speaking to you now, breathing, all of these things are expressions of a musical life.

A Book is Born!