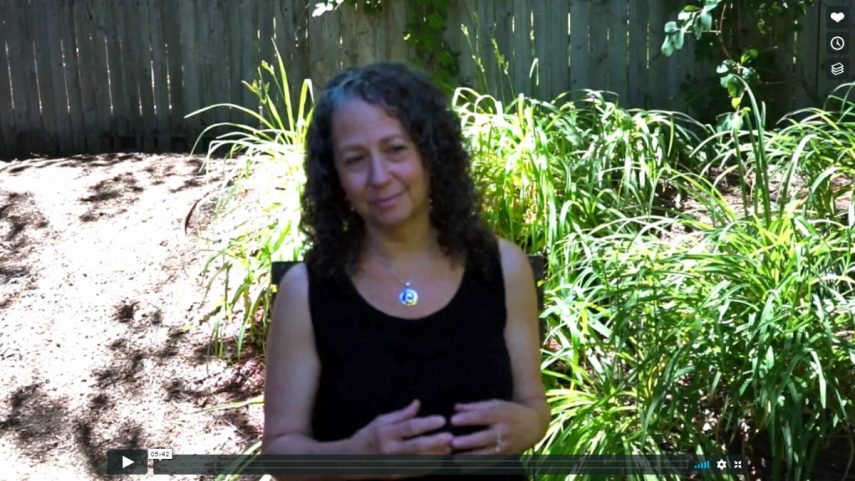 “On so many levels, I am convinced my practice of Continuum is what has allowed me to live for 9 years with a fairly advanced level cancer diagnosis.” — Bonnie Gintis, osteopath, author, Continuum teacher & Watermark Arts Science Advisor.

On so many levels I’m convinced that my practice of Continuum is the medicine that’s allowed me to live now for nine years with a fairly advanced stage cancer diagnosis. In the beginning it certainly helped me cope with what I was going through. I had breast cancer that never showed on a mammogram, and no one could feel it, including myself, so there was no way to know I had it until it spread to my bones. At the time I was diagnosed, no one expected me to live for more than a year or two, so I had to find a way to be with what was going on without being in terror and making things worse. And I feel like it was my Continuum practice that allowed me to breathe in a way that I could avoid the places that were incredibly painful.

I had a large tumor in my sternum that actually fractured, the tumor was so aggressively growing at the time. I had incredible dexterity and capacity to breathe in a lot of different ways and I learned how to breathe without moving the area that was so diseased and injured. I was able to just drop down and breathe from another place until it began mending itself, which it did. The cancer didn’t go away, but it got quiet. And now it just sits quietly in my bones, and I have a relationship with it. The most difficult relationship I’ve ever had – but it’s my ability to meet it.  I’ve changed, and it has changed.

“Health [is] about the full expression of the nature of the body, which is movement.”

So I realized early on that health is not the opposite of disease, and it’s not about resolving something that’s wrong in the body – although that’s the lens through which we usually view it, that’s what brings us to ask for help – but that health was about the full expression of the nature of the body, which is movement. And it’s no different in the body than on the rest of the planet and all of nature. Health is the expression of the movement of these natural laws and forces that we have on this earth, and that there was a way to practice in accord with that.

All of that got intertwined with my explorations in Continuum during my first year of school where I thought it was somewhat insane they were asking me to feel things in other people’s bodies that I had never felt in my own. So I embarked on my own parallel curriculum, where everything I was being taught to feel in other people’s bodies, I’d go home at night and I would find a way to spend time with myself, whether it was directly putting my hands on my liver or breathing and imagining the blood flow from my heart to my lungs and my kidneys. It was bringing the dry curriculum out of the book quite alive in me.

Many years later I finally dived into Continuum myself and realized that this was the perfect blend of understanding the body from inside mine in a way that allowed me to connect with other people and sense in theirs in a way that they never could have taught me in school.

I think with all the things that we go and ask for help for with our health, asking for what’s really needed in the moment is the key.  Sometimes it’s a very physical mechanical process, sometimes it’s something biological and sometimes it’s something more in an energetic or spiritual realm. Most people tend to gravitate towards one of those ends of the continuum. And for me it’s been an important lesson to meet the necessity of the moments. So where on the spectrum do I need to address what’s going on and draw from all areas.

In 2007 I published a book called Engaging the Movement of Life. What I hoped to do was gather together my notes from teaching for the previous 20 years because whether it was a class of osteopaths or a Continuum workshop, people would always come up to me and say, “oh, is there something I can read on that subject?” I used to jokingly say, “well, no one’s written the book yet.” Ultimately, I wanted everyone to understand that the book is not about osteopathy or about Continuum, the book is about the natural world, and how it expresses itself, primarily through movement in our body. Healing adaptability, change is no different in what happens in the planetary process and in the human body. And if somebody practices a form of health care that understands that and can work in accord with the way nature expresses itself through the body, that potential opens up tremendously.