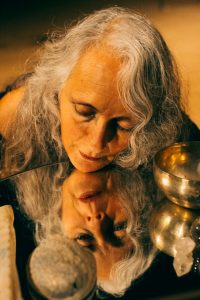 Ruth Wieder Magan is best known for her pioneering work integrating sacred texts into contemporary voice/body theatre. Her unique approach to the somatic and transcendental aspects of voice, text and spatial perception is deeply rooted in Jewish oral tradition and informed by contemporary body approaches. Her innovative work has enriched voice study, introducing it as evolving vibrational sculptures. Important aspects of Ruth’s music and vocal performances are the exploration of authenticity and rootedness in expressing the “wild female voice” and radical attentiveness to flow within vocal-body expression.

Ruth has been invited to represent Israel before H. H. the Dalai Lama on a number of occasions. She is a founding member of Theatre Company Jerusalem, as well as Red Moon Ensemble in Ireland, performs internationally and has created over 30 original works of theatre and music. In 2021 the India International Centre  hosted a retrospective of her work. Ruth has also released two albums, “Songs to the Invisible God” and “Kadayil Shabbaso”, both critically acclaimed. Her recent film “Mirror Sky”, released 2021, has garnered outstanding responses.

Barry Cohglan of Roy Hart Theatre, Allen Afterman, Emilie Conrad, Joyce Miller and Yoshto Ono have been most influential mentors for her.

Ruth is a respected mentor, a senior teacher at The School of Visual Theatre in Jerusalem and a certified Continuum Wellsprings Practitioner.

Quotes from the Press:  “[Her voice is] rich-textured…[her performances] from any cultural perspective, are intensely moving, a stunning combination of artistry and spirituality.” – Don Heckman, Los Angeles Times

“Haunting, moving, sometimes scary-the closest to a mystical experience I have had listening to music since the first time I heard Coltraine’s ‘A Love Supreme’, Faure’s ‘Requiem’, or the choral movement of Beethoven’s ‘Ninth’. Astonishing.” – George Robinson, The Jewish Week, New York

Becoming aware of the connection between voice and water revolutionized my understanding of voice and life. This awareness is a presence in my art forms and processes and will be forever. In deep gratitude to Emile Conrad and all the Continuum teachers and colleagues that have and continue to inform my path.