The Boys of Barr na Sraide

Prayer for a Hummingbird

“Once I started doing Continuum my hands felt like cilia, on the outside of a paramecium. So there was a sense of flow that was really extraordinary. One of the things that Continuum has done for me is that it has allowed me to really enjoy my hands, as opposed to make them so they were just servants. With Continuum I found the most effortless way to play music.” — Cory Blake 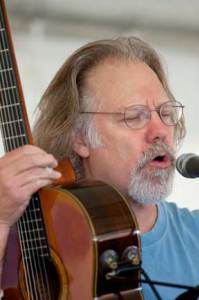 Cory Blake is a guitarist, composer, educator, integrative health coach, and Living Movement teacher. He was a student of the renowned Mexican mystic, poet, and guitarist Jesus Silva, whom he credits with being his doorway teacher.  As a musician he has performed in a multitude of venues and capacities including performances with the Richmond Symphony. His wife and he are the flute/guitar duo The Blakes.  He has taught classical guitar, improvisation, and world music on the faculties of the University of Richmond and Virginia Commonwealth University.

Cory has been particularly interested in the transformational and community building aspects of music and has facilitated many spirited drum circles.  During the eighties, with the intent to refine an effortless instrumental technique, he explored an array of mind/body technologies including Yoga, Tai Chi, and the Alexander Technique.  He has been a student of Zen and has been greatly influenced by the Meditative Inquiry model of meditation taught by Toni Packer. Ten years as a music therapist and Duke trained and certified integrative health coach working with veterans returning from war at McGuire Veteran’s Hospital led to his co-authoring, along with David Cifu, the book “Overcoming Post-Deployment Syndrome”.  He studied the work of Continuum with Emilie Conrad beginning in 1993 and was an authorized Continuum teacher from 2005 until her passing in 2014. Cory has also been a student of Susan Harper since 1994, and is deeply appreciative of her influence as well.

For the last few years he has partnered with artist and meditation teacher Mark Bryant in facilitating Big Sky Mind/Big Ocean Body movement and meditation retreats. He continues to play and teach music, teaches Living Movement workshops, and works with individuals in a private practice in Richmond, Virginia. Cory is deeply blessed in the life that he lives by the James River with his radiant wife Amy, his bourgeoning daughter Grace, his superhero dog Bali, and their curmudgeonly rabbit Bindi.